Wow peoples.  I’m really i have let this thing go.  So much has happened. so many tears, and so many shamefull mornings waking up with cake in my mouth.

This will be the beginning of several posts to come updating you all on what i’ve been up to since…this last summer.  It will be out of order, it will get messy and greasy, but you will get updated.

Last summer my super great queer photog friend quito zeigler called me up to get breakfast.  Over coffee and amazing breakfast sandwiches at the collossal cafe, we dreamed up the idea of a queer art/performance road show.  In our riffing of ideas, Quito planted the idea of doing a preliminary queer art show in NYC, drawing from the excellent pool of artists that quito attended the International Center of Photography with…along other seminal queer artists and activists.  The germ was planted…and then many months later Into the Neon was born.

Now, because I am such a terrible blogger, I am telling you this after the show has closed… but for those (like me) who were unable to attend the show regardless, maybe I can compile, and connect you to what happened with the show.

and I made the poster, which is a photocollage of the window of a gaybar in milwaukee where jeffrey dahmer used to find some of his victims at, and an old lover’s hand w/ sharpie drawings on it. 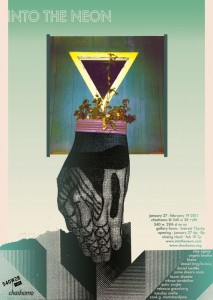 here’s one of the prints I had in the show.  It’s sort of a prototype.  I’m going to work with this print a little more, but here’s version 1.

This is the first of a series of portrait prints on foam.  The goal is to present several portraits of personas, people or characters who’s plastic play with identity acts as a way to order society.  This is a portrait of a trixter character whome appears during the Brazilian Carnival celebration.  Carnival is a celebration and farewell to bad things, but even during the uplift and celebretory atmosphere of carnival, the trixter’s mischeif making reminds parade goers of the death and troubles left behind, or will encounter in the near future.

The show, INTO THE NEON, was great from what I heard. Check the website to see the other amazing artists, and soon there will be photos from the show.

Some version of the same show will be held in Minneapolis in April.  More details about that to come.

Daniel Luedtke is a self-taught printmaker / artist / musician from Minneapolis MN. His brightly colored, graphicly bold prints utelize geometric abstraction paired with ubsurdist figurative elements that are often inspired by feminist politics, folk art, and kitsch. He got his start printing posters for his band Gay Beast back in 2006 and has since gotten many poster, packaging, and merchandise commissions. After completing a few printmaking residencies in 2008 and 2009 his focus has tended more toward fine-art printmaking, creating larger prints and installations for shows both in the u.s. and abroad.

I HAVE A TUMBLR – follow me into my studio. Sometimes there is mold

PULLED: A CATALOG OF SCREENPRINTING!